Part One: BS Detection in a World of Fake News and Real Threats. 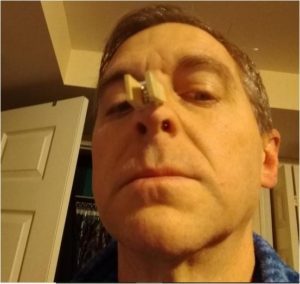 We were once inundated with information overload. These days an information fog shadows us as persistently as the dragnet of personal data collection. Its density thickens with a sprinkling of the toxic twin-headed vapor trails of mis- and dis-information. These droplets rain down on us from clouds of doubt that fall on cynical brains. Conditions for a mis- and dis- cloud burst are rife for conflicts. In the gloom of low visibility, they descend with no clear path to resolution and “no good options” for getting there.

Why, you say, do I need the twins? I’m plenty confused and doubtful in the density of my own fog. I’m already being pelted with incoming mis. Now you’re seeding the clouds with additional dis? Facts and opinions are now going bump in broadest daylight. Conspiracies are flourishing, egged on by persuasion-filtered innuendo. The evidence is sketchy. Context is disappearing, and now at the tail of the 2010s, we’ve truly lost our way. Took no effort at all!

Another snoop can’t retrace our own footsteps. But I do have some suggestions about how you can get yourself back on track — become your own service animal in the quest for an empirical truth. But first, what of the twins? How did they grow into this hydra-headed two-faced scrambler of once common understandings and shared values? Can they metastasize into three heads? Egads, let’s look at that one with our eyes drawn away from direct exposure.

First, let’s step back over the bridge to the land of national media networks held together with printing presses and TV antennas. There’s a dot on that distant landscape called fringe media and it’s a xeroxed pamphlet or poster fastened by a dangling staple or pushpin. The low rent district has some exclusive members. And no one’s in a hurry to join the club.

Mis and dis are no strangers to conspiracists, bloviators, and persuasion seekers, heels firmly dug in. In fact, they have a working arrangement of mutual benefit. Think of them as a tag team. But there’s no carrot or stick here. We’re not talking good/bad cop interrogations.

Misinformation is a side-show. A distraction. Tall tales and urban legends. Misinformation scrambles the signal, amplifies the flog, sows the initial seeds of doubt. If there is any collusion it’s that a blob of misinformation is disorienting. Two blobs can throw us into a state of confusion. Three blobs and we’re flying blind.

Up the Frustration Vent

Enter the clarity and purpose of deliberately misleading information. And don’t discount certainty. In the hands of true believer it may be a leap for some. But in the hands of the disinformer, it’s an intoxicant, providing an outlet for those festering anxieties and uncertainties induced by a thick trail of mis. Disinformation provides the escape valve:

A successful disinformation campaign not only clears the air but fans the grievance flames so that their frustrations are channeled towards the object of their hostilities. Often, they come with a lesson or instruction to act on the proof offered by the disinformer. In the case of social media, actors like Russia’s Internet Research Agency posed as like-minded American activists. The goal was for hostile agents like IRA to amplify already polarizing conflicts. Each schism a brand-ready theme for opening a new disinformation campaign front.

Disinformation is the main act, planting those seeds deep enough so that the earlier misinforming falsehood is sprouting up as a clearly absorbed conclusion. One in which recipients may be encouraged to take sides but will just as likely desensitize the un-inflamed:

This is a political food fight. Both sides are talking over each other and no one’s speaking to me.

Editor’s Note: This article republished with permission of the author with first publication on his blog  Searching Out Loud.