Little Free Libraries don’t have to be narcissistic self-promotion 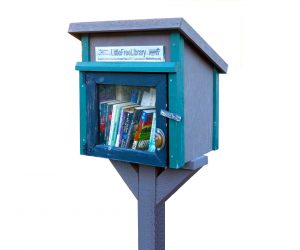 Some librarians really seem to have a mad on about Little Free Libraries. This piece on The Atlantic’s CityLab discusses a study published in the peer-reviewed Journal of Radical Librarianship concerning the distribution of Little Free Library take-a-book kiosks.

Toronto librarians Jane Schmidt and Jordan Hale got tired of some of the inflated rhetoric that surrounds Little Free Libraries, painting them as promoting literacy to the disadvantaged—so they did a study on where those kiosks were located in the Toronto and Calgary areas.

Far from exemplifying outreach to the disadvantaged, the librarians found, Little Free Libraries were located mainly in well-to-do neighborhoods.

She also points out that such kiosks generally aren’t truly “free”—they can run into the hundreds of dollars for those who buy them pre-made, and even those who make their own nonetheless have to fork over a $40 registration fee to be able to put the LFL brand name on their box (though the LFL organization does give away a number of free kiosks to groups who ask for them).

The study also points out that in some areas, Little Free Library-style kiosks have come at the expense of local public libraries. And frequently, such kiosks don’t have books anyone would actually want in them, but are used as dumping grounds for old textbooks or things nobody would really want anymore.

“I acknowledge that we can seem like a couple of librarians touting sour grapes by crapping all over this movement that so many people love,” Schmidt says. “We did try to come at this in a constructive manner. We maintain that you don’t really need the branding of Little Free Libraries. If anything, I think there’s a missed opportunity for public libraries to put their own branding on these things.”

It’s possible they might be happy about what Indianapolis has done with its Public Collection big free library kiosks, with collections curated by the local public library system. These installations are out in the open in public areas or places open to the public, including a hospital and a homeless shelter.

In any event, I know I have seen Little Free Library kiosks in some of the seedier parts of Indianapolis, though sometimes those kiosks haven’t had much worth picking up in them. But that’s strictly anecdotal data—and for all that it covers two cities in Canada, so is Schmidt and Jordan’s, to some extent. It’s a lot to generalize from just two fairly well-to-do cities in Canada to every Little Free Library everywhere in the world.

They do have a few valid points. It would be easy to paint many LFL installations as the real-life equivalent of “slacktivism”—something you do because it’s easy, and possibly for the sake of showing off rather than out of any real philanthropic inclination. On the other hand, if you’re going to put in a LFL installation, you can only do it on property that you own—and does it really matter why it’s there if it’s at least a little beneficial to those around it?

They may also have a point about the control the Little Free Library organization wields over its trademark, and the suggestions the organization has for what books are good to include—but you get that kind of pushback any time a single entity has control over a widely used trademark. If people don’t want to take part in the Little Free Library brand, nothing is forcing them to register their book kiosks as name-brand LFLs. I’ve seen at least a couple give-or-take-a-book kiosks here in Indianapolis with no such branding at all. (For example, the one pictured below.) 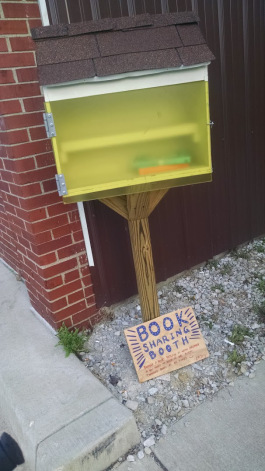 And that’s another part of the value of the Little Free Library movement—it leads to people having the idea to do the same thing whether they’re branding them that way or not. The “Book Sharing Booth” above, the Public Collection installations in Indianapolis, the other public libraries taking part in similar forms of outreach—they’re all ways for people to share literacy with others. And people might not even have thought of them if the Little Free Library idea hadn’t gone viral in the first place.

No one is arguing (or at least, no one should be arguing) that Little Free Libraries can replace the broader range of books and services offered by public libraries everywhere. But notwithstanding those places that are cutting library services while adding Little Free Library-style kiosks, it doesn’t have to be an either-or proposition. If we can have public libraries and LFL kiosks, what’s wrong with promoting literacy in every way we can?

Editor’s note – this article was republished with the permission of the author who published it first on his site, TeleRead.